Jan Hus (or Huss) was born around 1370 in the village of Husinci in today’s Czech Republic. Studied in Prague and became a bachelor of arts (Seven free arts) in 1393 and a master in 1396. Parallel with this study he studied theology and graduated as a bachelor. In 1401 he was elected dean of the Arts faculty and also ordained as a preaching priest. Since 1402 he was a much recognized preacher of the Bethlehem chapel in Prague.

Since his student days Hus was familiar with the work of John Wycliffe (died in 1384), a master from Oxford whose work on church reform was much supported by the Czech masters (teachers of theology) and opposed by the German ones. After additional conflict in 1409 all foreign theology teachers left to Leipzig and started a new university there. 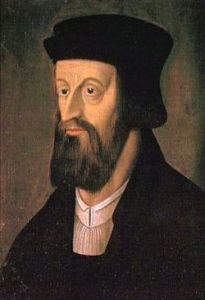 Hus preaching was attracting many people from the university, nobles and members of the royal court, even the queen Sofia). When the papal decree in 1410 forbade use of Wycliffe papers even their possession, the Archbishop of Prague ordered all of his books and writings to be burned publicly at his court and also prohibited preaching about his topics and work. At that point Jan Hus requested that the papal decree would not be executed and this was the beginning of the trouble. There were numerous other issues at stake, as well.

“The custom had arisen, at celebrations of the Lord’s Supper, of distributing the consecrated bread to all Christians in good standing who desired to receive it, but restricting the chalice to the celebrant alone. Huss denounced this restriction as contrary to Holy Scripture and to the ancient tradition of the Church. He also held that Church officials ought to exercise spiritual powers only, and not be earthly governors. In 1412 his archbishop excommunicated him, not for heresy, but for insubordination. (The real problem was that Huss supported one papal claimant and the archbishop another. Huss’s candidate was ultimately declared to be the true pope.) Matters came to a head when one claimant (later declared unfit) proclaimed a sale of indulgences to raise money for a war against his rivals. Huss was horrified at the idea of selling spiritual benefits to finance a war between two claimants to the title “Servant of the Servants of God,” and said so.” – By James E. Kiefer, Biographical Sketches of Memorable Christians of the Past

So, Jan was summoned to the Church Council of Constance in 1414 where he was asked to decline certain heretical doctrines of which he never held. Hus agreed to decline them but was not willing to swear an oath that he held these doctrines in the past. A matter of true conflict was that he stated that the office of pope is not established by God but by people in order to put the matters of the church in an orderly fashion. Huss shared this view with Thomas More. So, the Council found him guilty of heresy and he was burned at the stake on 6 July 1415. 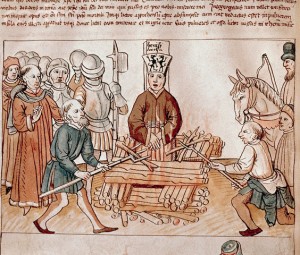 The Roman Catholic Church 20 years later authorized the Church in Bohemia to offer the cup as well as broken bread during the Holy Communion. Luther acknowledged, a hundred years later, that Hus had been unjustly condemned, and the whole issue of papal authority was again at the centre of theological issues of the Reformation.

What has changed since? Where are Hus and Wycliffe and More of the 21st century? Apparently all is well today. We need no changes. What do you think?